12:05 PM PT — Miley’s now addressing the backlash for her claim that crappy men forced her to be gay. She’s making it crystal clear … she stands with the LGBTQ community. 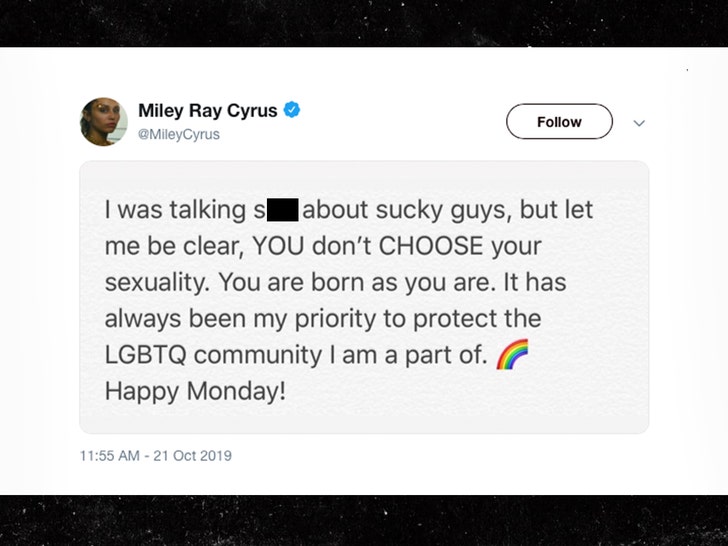 10:17 AM PT — We’re told Miley’s attack has nothing to do with their divorce case. We’re told the divorce is going smoothly. We’ve learned there was a prenup, so they aren’t fighting over property, and they didn’t have kids so there’s no custody battle. What’s more … we’re told Miley and Liam don’t even speak so an argument didn’t trigger her comments.

Miley Cyrus is taking some thinly-veiled shots at Liam Hemsworth, suggesting he was such a bad husband … she thought all men were trash, and had no choice but to be gay.

Miley and her new man, Cody Simpson, did an Instagram Live video together Sunday to reminisce about their less-than-a-month-long relationship. The chat included her discussing her “hardcore feminist vibes” and dating struggles after splitting from Liam, which led to her whirlwind relationship with Kaitlynn Carter.

Miley said, “There are good men out there, guys. Don’t give up. You don’t have to be gay. There are good people with dicks out there. You just gotta find them. You gotta find a dick that’s not a dick, you know what I mean?”

After Cody laughed about her advice, she continued … “I always thought I had to be gay because I just thought, like, all guys were evil, but it’s not true. There are good people out there that just happen to have dicks. I’ve only ever met one.”

She then insinuated that one good guy with a penis is, in fact, Cody … which put a smile on his face.

As we’ve reported … the 2 have been getting closer and closer since video surfaced of them kissing, and Cody’s even been spotted hanging with Miley and her mom.

Miley’s remarks probably won’t sit well with the LGBTQ community, and could potentially make her divorce from Liam more contentious.

Rob Kardashian Off the Hook for Alleged Threats Against Pilot Jones