Ja’Net DuBois‘ family is revealing an amazing hidden fact about the “Good Times” star — her biological father was none other than jazz legend Cab Calloway … or so they believe.

It’s turning into quite a showbiz mystery, actually … one that started when Ja’Net’s death certificate was released this week by L.A. County. The document, obtained by TMZ, lists her father as Cab — and says she was also known as Jeannette T. Calloway-DuBois.

It’s interesting because, in addition to acting, Ja’Net was a singer. She co-wrote and sang the theme song to “The Jeffersons” … which makes ya think the apple didn’t fall far from the tree.

If you don’t know, Calloway’s swing era, singing and dancing, helped put Harlem’s famed Cotton Club on the map in the 1930s.

However, before anyone starts rewriting history … there’s a dispute. Every online bio for Ja’Net lists her dad was Gordon Dubois and her mother was Lillian Gouedy. Her mom’s name is the same on the death certificate, but Mr. Dubois is nowhere on the document. 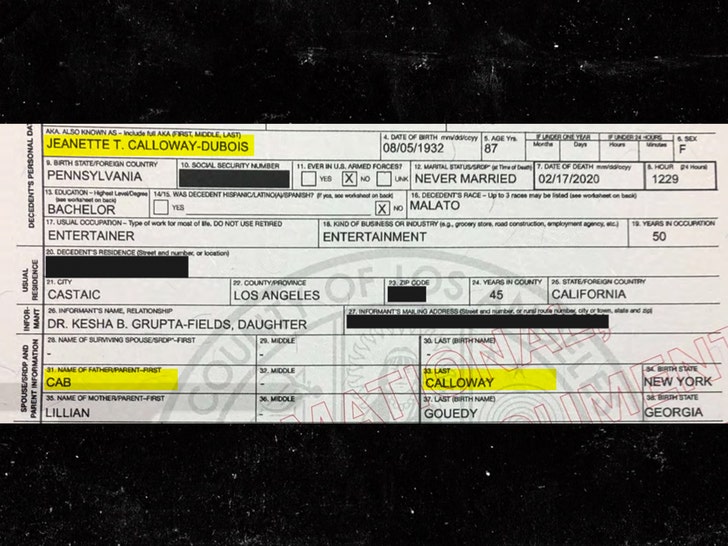 Ja’Net’s daughter provided the info for the death certificate, and when we asked her to clarify, she would only say Gordon was married to Lillian and “instrumental” in raising Ja’Net. Basically, a stepfather.

Now, Cab died in 1994, but his estate has no clue about the alleged connection. The estate tells TMZ .. “While we have a great appreciation for Ja’Net DuBois’ long and successful career, the Calloway Estate has nothing to add to this single document that has numerous mistakes and no verification.”

For instance, the estate points out there are multiple birthplaces and birth dates listed online for Ja’Net. We’re told they’d be open to a conversation with her family if there were any “compelling facts to substantiate” their claim.

Madonna’s Getting Serious with 25-Year-Old Boyfriend, His Dad Says

Posted by admin - December 30, 2019 0
Exclusive Getty Composite Madonna and her 25-year-old BF aren’t exactly rushing to the altar … but all signs point to…